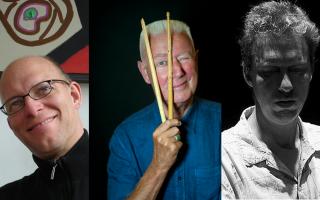 The trio of Han Bennink, Michael Moore and Ernst Glerumcan be perfectly regarded as the skeleton for the ICP Orchestra. They are three masters of the difficult art of improvisation.

Han Bennink,a one-of-a kind drummer and complete artist (he also paints),is among the musicians who helped create a European improvised music scene. He has worked with such legends as Ben Webster, Dexter Gordon and Sonny Rollins. Owner of aunique style, Bennink can dazzle audiences with his masterful drumming or by using any element for percussion that he may find right before getting on stage.

California-born, Holland-based clarinetist and saxophonist Michael Moore, a disciple of Jaki Byardand Gunther Schullerat the famed New England Conservatory, has solid work experience together with Bennink, not only in the ICP but also inthe celebrated Clusone Trio – also featuring cellist Ernst Reijsinger– with which he toured several years and released six albums, as well as in another trio with Fred Hersch and drummer Gerry Hemingway.

Bassist and pianist Ernst Glerum has received the VPRO/Boy Edgar award in 2009, the highest recognition for jazz musiciansin the Netherlands. He has worked alongside such renowned artists as George Lewis, Jimmy Knepper, Steve Lacy, John Zorn and Lee Konitz, among others.