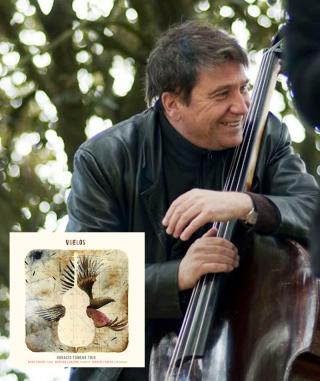 Santa Fe-born bassist Horacio Fumero, based in Barcelona since 1980, after living seven years in Geneva, brings a great new release: Vuelos, recorded with pianist Diego Schissi and trumpeter Mariano Loiácono. The album has its genesis in a television project for Catalan channel TV3, meant to explain the mechanics of jazz to the audience through original compositions. Fumero thus created 50 minutes of music and titled each song with the name of a bird. According to his own description, “The desire to fly is as old as humanity and as powerful as to having turned the verb alone into a beautiful metaphor. Composition was never my main professional focus, but I have written a few pieces over the years and titled them with bird names. The first one was ‘Hornero’, one of my winged companions as a child; later came ‘Carancho’ (southern crested caracara), ‘Chimango’, ‘Torcacita’ (little wood pigeon)...and more recently, ‘Tordo’ (thrush), ‘Chajá’ (southern screamer) and ‘Tero’ (southern lapwing). I had previously recorded some of these pieces but never with the same ensemble and on the same album until now. The lineup of trumpet, piano and double bass is one of my favorites because it facilitates the interaction between band members and allows for rhythmic interplay.” This concert will also feature pianist Francisco Lo Vuolo.