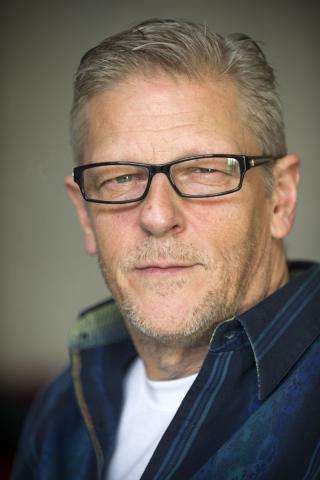 He was born in Antwerp, Belgium, in 1958. He has produced works as a visual artist, theater maker and author. In 1982 the work “This Is Theatre Like It Was to Be Expected and Foreseen” and two years later “De Macht der Theaterlijke Dwaasheden” (“The Power of Theatrical Madness”) challenged the foundations of the European theater establishment. Chaos and discipline, repetition and madness, metamorphosis and the anonymous are indispensable ingredients in Fabre’s theater. Productions such as “Je suis sang, Tannhäuser,” “Orgy of Tolerance,” “Preparatio Mortis” and “Prometheus-Landscape II” have earned Fabre international acclaim. He has also built up an exceptional oeuvre as a visual artist with exhibitions like “L’ange de la metamorphose” (Louvre, Paris 2008), “From the Cellar to the Attic - From the Feet to the Brain” (Kunsthaus Bregenz, 2008; Venice Biennale, 2009), “Pietas” (Venice Biennale, 2011) and “Chapters I-XVIII.” “Waxes & Bronzes” (Royal Museum of Fine Arts of Belgium, Brussels 2012-2013). In the future, he will be working on a 24-hour theater project called “Mount Olympus,” which will be out in 2015.