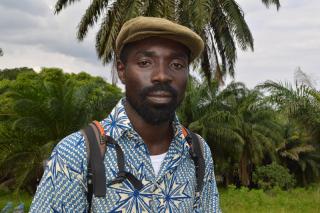 In 1997 during the civil war that devastated the Congo a second time, he brings the company Les Bruits de la Rue to stage and produce the plays that he started to write while being trained in the plastic arts at the École Nationale des Beaux-Arts of Brazzaville. With his brother Criss, he creates his own group, convinced that it was necessary to start with the world that surrounded them, the streets of their city, to create a new writing and aesthetics. The demanding construction-deconstruction of Dieudonné Niangouna's texts, made up of moments of absence, memory lapses, flashbacks, tears, scattered pieces, monologues and dialogues don't write a linear history, but recreate a world made of odds and ends, tiny details that seem too powerless to provide an image of the real but that, put end to end, approach the truth. In this dynamic and to insert this vision into art in Brazzaville, he creates, in this city in 2003, Mantsina sur Scène, an international festival of contemporary theater and performance. In 2002, with “White Square,” he performed in France for the first time. Then he premiered in this country “The Base of Vertigos.” The Festival d'Avignon welcomed him in 2007 with “Attitude Clando,” then in 2009, with Pascal Contet for “The Flying Ineptitudes.”