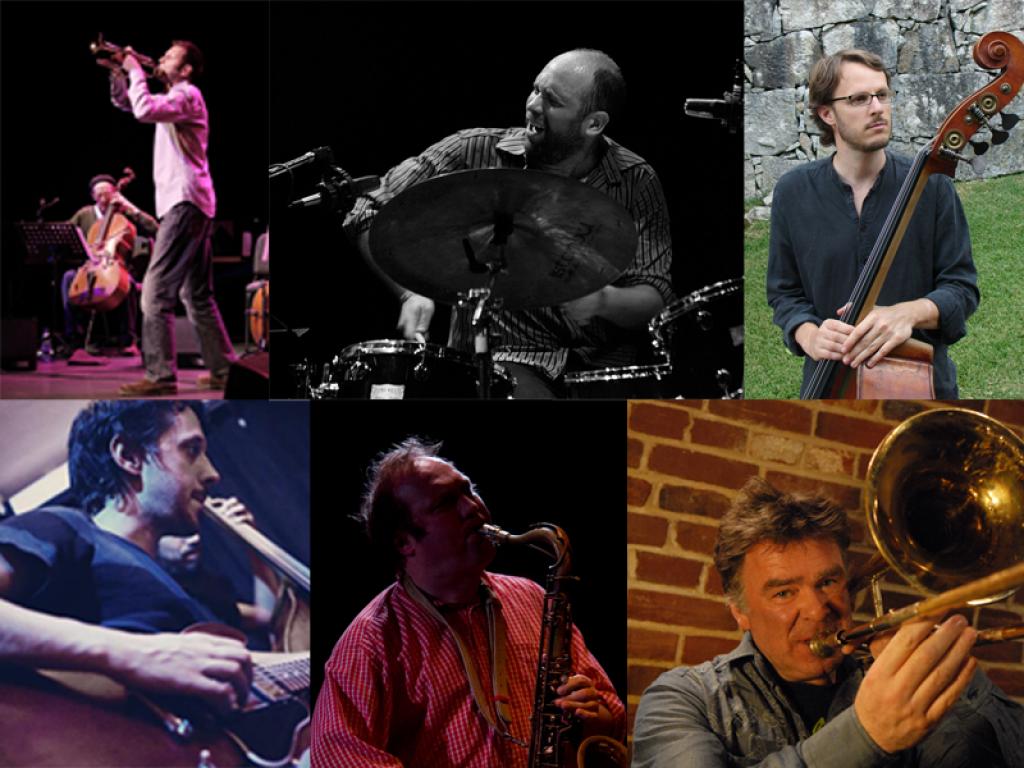 German trumpeter Thomas Heberer was born in Schleswig in 1965 and studied at the Conservatory in Cologne until 1987. He has since played with such musicians as Muhal Richard Abrams, Dave Douglas, Maria João, Howard Johnson, Bob Moses, David Moss and Enrico Rava, and worked with famous dancer and choreographer Pina Bausch. He is member of several bands such as The Berlin Contemporary Jazz Orchestra, European Jazz Ensemble, Aki Takase Quintet and Tome XX, and has a duo with bassist Dieter Manderscheid. As a globetrotter, British saxophonist Tobias Delius was born in Oxford, but grew up between Germany and Mexico, and in 1984 continued his career in Holland: he moved to Amsterdam, where he studied at the Sweelinck Conservatorium. Since 1990 he has led the Delius Quartet with Tristan Honsinger, Joe Williamson and Han Bennink. He also plays in Available Jelly, Sean Bergin’s MOB, Cor Fuhler’s Corkestra and Georg Graewe Quintet. In 2004 Delius won the VPRO/Boy Edgar Award, the Netherlands’ most prestigious prize in jazz.

de Música Contemporánea), New York (with Peter Bernstein, Bruce Barth, Steve Cardenas and Barry Harris) and Amsterdam (at the city’s conservatory). Since his return to the country, he has been involved in varied musical projects. He has also released

three solo albums: Vidrieras, La corvina alegre and Minimal. 36-year-old bassist Demian Cabaud divides his time between his own projects and playing in other bands. As a bandleader, he released Naranja, Ruinas, How About You? and En febrero. Also, he has been called to play with musicians like Lee Konitz, Chris Cheek, Mark Turner, Bill McHenry, Rich Perry, Rick Margitza, Seamus Blake and Perico Sambeat.

Drummer, percussionist and composer Hernán Mandelman has taken part in many projects, such as Guillermo Bazzola’s Summer Quartet and Juan Cruz de Urquiza Quinteto, and played in the groups of Carlos Lastra, Leo Álvarez, Ricardo Cavalli, Enrique Norris and Luis Nacht. He has recorded Detrás de esa puerta and Donde estás, featuring original compositions, as a quintet leader since 2010.