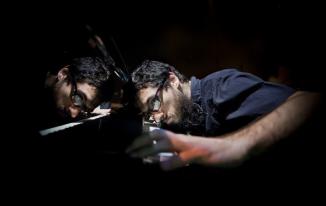 The double program for Thursday, Nov 21 starting at 8 PM at Teatro Presidente Alvear includes a performance by the trio of drummer Han Bennink, clarinetist and saxophonist Michael Moore along with bassist-pianist Ernst Glerum as well as the solo piano concert by world-renowned Argentine pianist Leo Genovese. For this reason, it will be a very special night. The Dutch trio players combine extraordinary technique and great talent, and make up the backbone of the ICP Orchestra. Earlier, the three musicians will conduct instrumental clinics: Bennink at Café Vinilo and Michael Moore at Thelonious Coub at 12.30 PM, while Ernst Glerum at Café Vinilo at 3 PM. The concert by Genovese, a native of Venado Tuerto (Santa Fe province) with an ascending international career (which includes, for example, performing as a sideman for stellar contemporary artist Esperanza Spalding), acclaimed by the critics and lauded for his impeccable technique and versatility, will be another highlight. Tickets for this first-class double-bill concert are already on sale, on this website and at the box office of Teatro Presidente Alvear (Av. Corrientes 1659, from Tue to Sat, noon–8 PM) and at Tu Entrada (Av. Corrientes 728, from Mon to Sat, same hours).