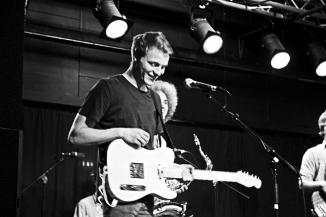 The jazz concert program at CC Recoleta begins with all its might. Ther will be a variety of free gigs to enjoy good music starting at 3.30 PM at Auditorio El Aleph and at 6 PM on the Terraza of the Centro Cultural Recoleta, there. In the afternoon, El Aleph will host the solo piano performance by pianist-composer-teacher Alan Zimmerman (3.30 PM) and then the concert by Bosphorus Dúo, featuring guitarist-composer Serkan Yilmaz and percussionist Horacio Cacoliris (4.30 PM). On the terrace, the legendary “Jazzology” concert series begins at 6 PM with performances by gypsy jazz group Chemanush and the Louisiana Jazz Band (at 7 PM). Later at 8 PM singer Grace Cosceri will take the stage, accompanied by Mariano Agustoni (keyboards) and Quintino Cinalli (percussion). And the night’s headliner will play at 9 PM: the outstanding Danish guitarist Jakob Bro will lead a quartet with Danish bassist Anders Christensen and Argentine musicians Rodrigo Domínguez (sax, clarinet) and Carto Brandán (drums).

Amid concerts, this afternoon the Cinema & Jazz series begins in synchrony with tonight’s main event. At 5 PM, the Microcine of the CC Recoleta will screen “Weightless: A Recording Session with Jakob Bro”, a documentary about the recording of the Danish guitarist’s album “Balladeering” with a band of stellar musicians including Bill Frisell, Lee Konitz and Paul Motian. After the screening, the musician will engage in a discussion with film critic Fernando Chiappussi and answer questions from the public.