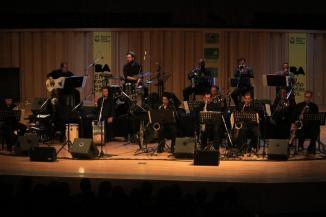 Tomorrow, after the series of concerts scheduled at La Terraza of the CC Recoleta, the audience will be invited to walk a few blocks over to the main stage mounted at the corner of Av. del Libertador and Agüero. At 9 PM, there will be a concert by Brazilian Rosa Passos and Banda Mantiqueira, eminent guest artists who have already visited the Festival in the past: the singer performed at the closing of BAJ 2008, while the big band closed BAJ 2012. In both occasions, they each delivered skillful and heartfelt performances becoming instant favorites for the audience. Passos will debut her new album based on the work of Djavan, while Banda Mantiqueira will raise the heat with their contagious combination of popular Brazilian rhythms This will be a celebration night as well as a treat from the Festival to the City.