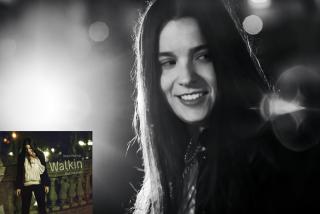 Singer Barbie Martinez will present her third album Walkin’ Out the Door, accompanied by

Francisco Lo Vuolo (piano), Leo Cejas (trumpet), Sebastián Groshaus (drums), Carlos Lastra (saxes and arrangements) and Sergio Wagner (cornet). The versions of “Round Midnight”, “Peace” or “Blue in Green” set the album’s reflexive mood, where the arranger’s aesthetic touch can be noticeable. As a counterpoint, the edgy arrangements of “Just One of Those Things” and the unknown composition by George Gordon, “My Kokomo”, have more of a playful spirit. This has been a particularly busy year for Barbie, as she also released her second record last February: Barbie Martinez - Live at Thelonious Club, the first live vocal jazz album in Argentina. Chosen singer of the year in 2010, 2011 and 2012, on the annual poll of magazine El Intruso, she has also received a Jazzology recognition in 2008 as best new vocalist of the season. Her musical career began in 2003, when she started to play the circuit of clubs and theatres. She has played with such diverse artists as Carlos Lastra, Américo Bellotto, Paula Shocron, Mariano Loiácono, Ricardo Lew, Ángel Sucheras, Manuel Fraga, Adrián Iaies, Oscar Giunta, Gustavo Musso, Jerónimo Carmona, Juan Carlos Cirigliano and Ramiro Flores, among others. She was also part of Los Swing Timers and the Américo Belloto Septeto.