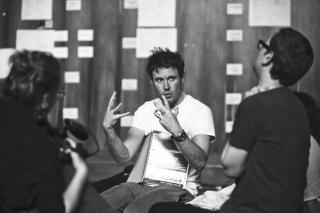 He founded Vanishing Point in 1999 and has directed all of the company’s productions. Recent work includes “Wonderland”, “Saturday Night”, “The Beggar’s Opera”, “Interiors”, “Little Otik”, “Subway” and“Mancub”. Other work includes an adaptation of “Les Aveugles”, by Maurice Maeterlinck. He has recently been leading masterclasses for the CenaContemporânea in Brasilia and at the Stanislavsky Foundation in Moscow, building up to a new international work in 2014. He is currently creating “The Beautiful Cosmos of Ivor Cutler” which will premiere next year. He recently directed his first film, “Boy”, for Touchpaper Television and Channel 4. In 2010, he was chosen to be the first British director of the École des Maîtres, a European theater laboratory previously associated with Jerzy Grotowsky, Peter Stein, EmuntasNekrosias and Jan Fabre. He has recently directed “Mister Holgado” and “The Legend of Captain Crow’s Teeth” for the Unicorn Theatre in London, and “A Midsummer Night’s Dream” for the Royal Lyceum, Edinburgh.