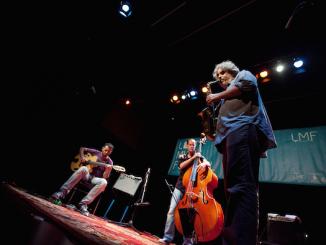 The schedule of international concerts for Saturday is varied and rich. In the afternoon, American saxophonist Tim Berne and Finnish pianist Frank Carlberg will share the stage of the Auditorio of the Usina del Arte as of 4 PM: Carlberg in a solo piano performance, and Berne playing with the local trio led by Ernesto Jodos. In addition, Berne will conduct a saxophone clinic at Café Vinilo on Monday, Nov 25 at noon. The evening’s headliners come from New York: Brooklyn-based guitarist Jonathan Kreisberg, one of the most interesting artists on today’s international jazz scene, will perform with his trio – also featuring Rick Rosato (bass) and Colin Stranahan (drums) – at 8 PM at Teatro Pte. Alvear. A little later, singer and saxophonist Darmon Meader will play in concert accompanied by talented Argentine musicians Ignacio Amil (piano), Juan Manuel Bayón (double bass) and Eloy Michelini (drums) at Sala de Cámara of the Usina del Arte. Tickets for these concerts and Berne’s clinic are on sale on this website or can be purchased at the box office of the Teatro Alvear and at Tu Entrada, from noon to 8 PM.