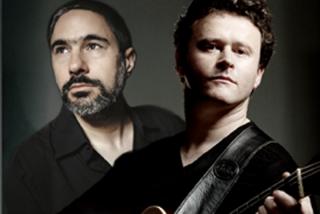 Having known each other for a long time, Sylvain Luc and Jean-Michel Pilc formed a duo last year, when they performed a totally improvised concert for two nights. They currently play a repertoire focused on standards, French songs, groovy music, blues and free improvisation.

With fifteen albums as leader and an extensive career, Sylvain Luc is a giant of European jazz guitar. He began his music training at a very young age, studying double bass, cello and classical guitar at the music conservatory of Bayonne, until he moved to Paris. He soon became a sideman for Wynton Marsalis, Steve Gadd, Lokua Kanza, Michel Legrand, Elvin

the release of his first solo album, Piaia, in 1993, he has built a solid career including hit albums such as Duet (1999), in a duo with Biréli Lagrène. He received the Grand Prix de la Sacem in 2010 and the Django Reinhardt award from the Jazz Academy.

Jean-Michel Pilc was born in Paris in 1960. In 1995 he moved to New York, where he went on to a prolific career as an artist and educator. He has played with Roy Haynes, Michael Brecker, Dave Liebman, Jean Toussaint, Michel Portal, Daniel Humair, Marcus

Miller, Kenny Garrett, Mingus Dynasty & Big Band, Lew Soloff, as well as worked as pianist and musical director for Harry Belafonte’s orchestra. Also, he formed an acclaimed trio with Ari Hoenig and François Moutin and released many albums together. His work as an educator is reflected in his recently released book It’s About Music - The Art and Heart of Improvisation and instructional video for all instruments: True Jazz Improvisation.