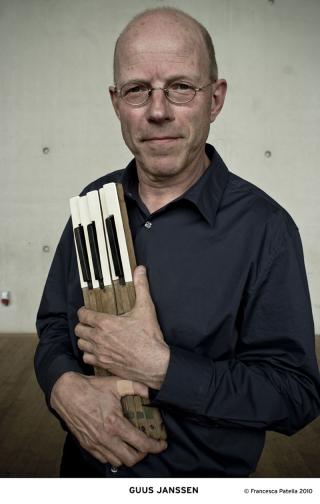 At 62 years of age, Dutch pianist, composer and director Guus Janssen is a category-defying musician.

He moves through different genres, formats and languages with absolute ease. He studied piano and composition at the Sweelinck Academy of Music in Amsterdam. He has played in various groups with musicians including John Zorn and Gidon Kremer. Since the 1980s he has led his own ensembles and projects, ranging from piano trios to opera composition. As a soloist, he has participated in numerous international jazz festivals. His music has been widely acclaimed. Apart from the pieces for his ensembles, he has written compositions for piano and string quartet, widely played by, among others, the Kronos Quartet, the Schönberg Ensemble, the Ebony Band and the Koninklijk Concertgebouworkest. In recognition of his quality as a composer, Janssen won the Matthijs Vermeulen Award in 1984. So far he has composed four operas in collaboration with Friso Haverkamp: Faust’s Licht (1988/1993), Noach (1994), Hier (2000) and Blue, a Pinnocchio in Reverse (2010). Also, his work Verstelwerk had its New York premiere in Zankell Hall, performed by the Riverside Orchestra. In 2008 he released a new solo piano album titled Out of Frame. An ever-restless musician, Janssen premiered new pieces last year.