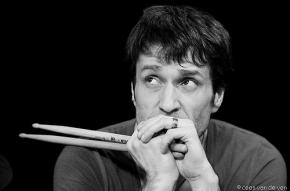 Drummer Eric Echampard was born in France in 1970. He began drumming lessons in 1978. He graduated from the Conservatory in Lyon. He plays in several bands: the Marc Ducret Trio; On the Corner, led by David Liebman; Unit, with Michel Portal; Andy Emler’s MegaOctet; Benjamin Moussay’s trio and Caravaggio Band. He plays in a duo with Kimmo Pohjonen as well as in Le Quattro Stagioni-Vivaldi Universel, with Christophe Monniot, and in Furrow, with Maria Laura Baccarini and Régis Huby. He also plays in a trio with Tony Hymas and Bruno Chevillon, and in Alain Vankenhove’s and Fabrice Martinez’s quartets.